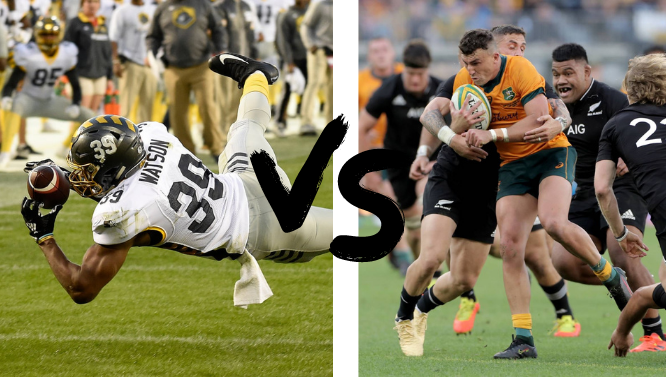 By Ritu Bain, Head of Sales-India

On a holiday to the Big Apple, a few years ago, a friend and I walked into a sports bar to unwind. The place was brimming with fans gathered to watch the NFL game. There were flags, tee-shirts, even beer mugs of the two teams playing on the day and the atmosphere was nothing short of electric.The game had just started and there were a lot of vociferous people on either side of the bar and a few like me were in the neutral center there for a good beer and conversation. Next to me at the counter was a burly man in his fifties, his eyes transfixed at the large screen. While I was speaking to my friend, the volume was muted during commercials for drink orders, everyone turned to me with indiscriminate expressions as I said, “I have never seen a Rugby match like this before!”

My American friend turned red and I fathomed I might have uttered something utterly preposterous. The bulky man beside me stood up from his stool, almost like the real version of Hulk and said, “Because this isn’t one dear!”. With so many glares directed at me, we quickly paid for our drinks and made a quiet exit.

A very common mistake people often make between Rugby and American Football is they think it is a pseudonym of the same sport. My faux pas at the bar meant it was about time to understand how these two sports differed. Lesson one – just because hot Herculean men are seen chasing the ball in both the sports, it doesn’t mean they are the same!

Chasing the history I found that Rugby was first played in Europe in the early 19th century with the governing body known as the Rugby Union. By 1875 the European settlers took the game to America and adapted with new sets of rules and named it American Football. Consequently, the NFL was founded in 1920 with 32 teams. ‘Convergent Evolution’, a reference from Biology would best describe the relationship between Rugby and American Football.

The first gen that illuminated my grey cells was that the dimension of a Rugby field is 120 meters by 70 meters while American Football has a field that is 110meters long and 50 meters wide. Also a significant difference between Rugby and American Football is that while the former is played with 15 players, the latter has 11 players.

Another important revelation that made it a different ball game was the difference in the characteristics of the ball. The ball in American Football has honed ends and weighs about 200 gms, that helps the ball to fly across the entire distance of the field as opposed to the Rugby ball that has flat ends about 28 cms long and 60 cms wide weighing in between 400 to 460 gms. Long throws are not really common in Rugby, it is all about precise terse passes with underarm grip that helps in stability and accuracy for short distance. “Shape” matters was a lesson well learnt!

A Rugby match is an 80 minute affair where the match is divided into two 40 minutes halves with only 7 substitutions. With mere gum shields and shin protection the players collide, of course with very stringent rules that call for serious infractions including the legendary red card. Winston Churchhill has famously remarked “Rugby is a hooligans game played by gentlemen.”

American Football is divided into two halves of 30 minutes each and four quarters of 15 minutes and unlimited substitutions. The players in American Football gear up with more protection that comprises helmet, shoulder pads, gloves, the ‘pigskin’, leg protection, teeth protection, however that definitely does not imply that it is less collisions. On the contrary, because of the protections, players are known to play more precariously with some serious life impending injuries.

Passes and scoring differs in both the games, when a player enters the opponent’s end zone, it is considered as a score in American Football. “For every pass I caught in a game,I caught a thousand in practice.” Don Hutson has said on numerous occasions. Incidentally, practice and perseverance brings precisions irrespective of the sport.

When the ball is kicked in Rugby and touches the ground over the opponent’s try line it is considered a touchdown, also there are no forward passes in Rugby. I wondered what’s with the World Rugby Law 12: Knock on or Throw Forward? I had to go back and brush up on my physics to understand the whole concept.

Educating myself on both the games was quite a reality check on how little I knew and how much more there was to know. However, during my self-tutoring to avoid any further stupendous embarrassment, I chanced upon the famous Shefiq Kuki’s celebratory swan dive in Rugby and Joe Mixon’s TD celebrations. These were some historical dance moves and so many more that I will save it for another time.

Now that I was clear with the basic differences that were too stark to be called the same, I went back to the bar the following week, this time I watched the match as much as I enjoyed it with an updated dossier. The striking similarity between both the games was the verve, the beer and the passion. Fans cheering on their teams and their favourite players. The excitement in the crowd and the emotions the game brought out in the fans was real and palpable.

Back from holiday and heading to my friend’s pre-wedding ballroom dance lessons in the garden city of Christchurch, New Zealand, I noticed the crowd in front of a Rugby stadium. I was reminded of a famous statement made by Heyneke Meyer “Ballroom dancing is a contact sport. Rugby is a collision sport.” It is also perhaps an oxymoron of life as we live it.