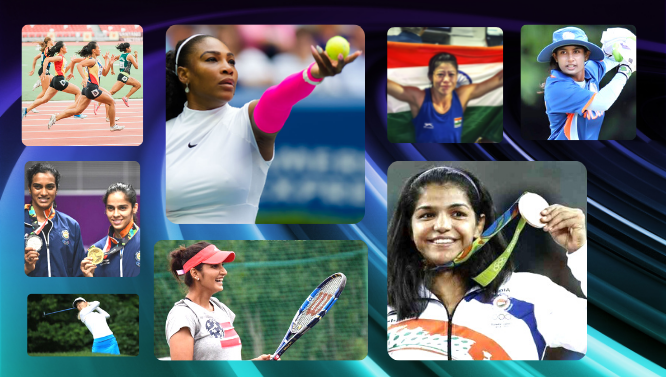 Celebrating the “avatars” of women in sports

In Hindu mythology Durga means fort and is perceived as an informidable force, she was created by the trinity of Brahma, Vishnu and Shiva and blessed by all the Gods with weapons and skills in each of her ten arms. If we were to imagine Durga in one of her avatars as an ordinary girl called Bebe Vio in Italy, bound to a wheelchair due to meningitis, it would be easy to picture her as an ace fencer paralympian.

Her discus, blessed by Vishu, empowered another avatar in Sandra Perković from Croatia to win the gold at the Olympics. Interestingly, much before any of us were born in the 6th century BC, The Heraean Games were the first official women’s athletic competition that was held, dedicated to Hera, the queen of Olympian Gods, also the wife of Zeus in the Olympic stadium at Elis. Hera would have been profoundly happy to see the accomplishment of contemporary women in sports.

History also points towards women as gladiatrices who fought with men and other wild animals in Rome, the sport that needed valor and courage in equal measure. Mevia was one such who used a spear in her hand and hunted wild boars. Much later in Scotland somewhere in 1567, Mary Queen of Scots scored an albatross, setting an unprecedented example for women in golf. Well, that was definitely some “goulf” my lady!

A French mademoiselle, Madame Bunel defeated an English Gentleman Mr. Tomkins at tennis with a score of 2-1, eventually winning again in a rematch 11 days later in 1768.

Down the ages, women have marked themselves as mavins in archery, however, who could have thought that mangoes would have lured Deepika Kumari into the sport, that led her to carve a niche for Indian women in the world of archery. We see our Durgas in Mary Kom (boxing), PV Sindhu (badminton), Vinesh Phogat (wrestling), Harmanpreet Kaur (cricket), Tashi and Nungshi Malik (mountaineering), Suma Shirur (shooting), Manika Batra (table tennis) by illuminating their glories with Padma Bhushan (third highest civilian award) and Padma Shri (fourth highest civilian award.)

‘Row Row Row your boat’ a song that might have well been inspired by Ann Glanville and her team of girls who took rowing rather seriously when they rowed a four-oared watermen’s boat and won against the best male teams in their white dresses and caps. While it irked some it definitely enthralled Queen Victoria.

In America, Betty Chapman shattered the shackles of racism and became the first coloured woman to play professional softball. And Ms. Patricia McCormick literally took the bull by its horn by being the first woman matadora in America. While Angela Hernandez of Spain won a fight against the system to lift a ban on women matadoras. Sexism made these women see Red.

Starting from Billie Jean King, Navratilova, Steffi Graf, Sania Mirza, the William girls, each of them have carved a space for women in tennis. The epic moment in Women’s sporting history was when Tickets for the Women’s Singles final of the 2015 US Open sold faster than the Men’s final.

Mieko Nagaoka, the first centenarian to complete 30 laps of pool in an hour and 15 minutes and 54 seconds. おめでとうみえこさん (congratulations Mieko San!)

Our own queen of track and field, PT Usha, won medals for India in the ’80s. 25 years later a 25-year-old Afghan woman called Zainab became the first woman to run in a marathon in her own country.

‘Ain’t no mountain high enough’ perhaps true for Ms. Katie Sarah, fondly called Seven- Seven, from Australia, who became the first to summit the highest mountain in every continent and the seven highest volcanic peaks in 2018. Junko Tabei from Japan was the first woman to summit Mount Everest and is famously quoted “I can’t understand why men make all this fuss about Everest- it’s only a mountain”.

Tatiana Calderón became the first woman F1 test driver. A sassy girl behind the wheels.
“This is my adrenaline fix,” said Jamie Chadwick, breaking a 42-year lacuna for women by gathering all the wins in W series Motor racing that propelled her career in 2019.
Ana Carrasco from Spain became the first woman to win FIM Supersport 300 world Championship in an individual motorcycle race in 2017. Curving lean on a motorcycle, Alisha Abdullah is India’s first racing champion and Aishwarya Pissay heralded her way as the first woman of Indian origin to participate in the Baja Aragon rally in Spain.

Coming back to our Durga whom we worship during the nine-day Navratri festival, these women are all Durgas in their various avatars standing tall in solidarity, inspiring and empowering the others that follow their track. Each of them has fortified and chalked a route map for the others to succeed. Serena Williams once said, “The success of every woman should be an inspiration to another. We’re strongest when we cheer each other on.” Whether it is a Betty, a Mitali, an Ariarne or a Dalilah she crosses every hurdle, breaking the shackles of age, race, colour, gender, battling every evil of exploitation, inequality and inadequate training. She has done it all with her might. To her, we pay our salutation. A strotam from the Vedas reads, ‘Jaya Jaya he Mahishasura Mardini’ that beautifully salutes and eulogises Her victory, slaying the demons is not a victory of one or few, it is the victory of womanhood.